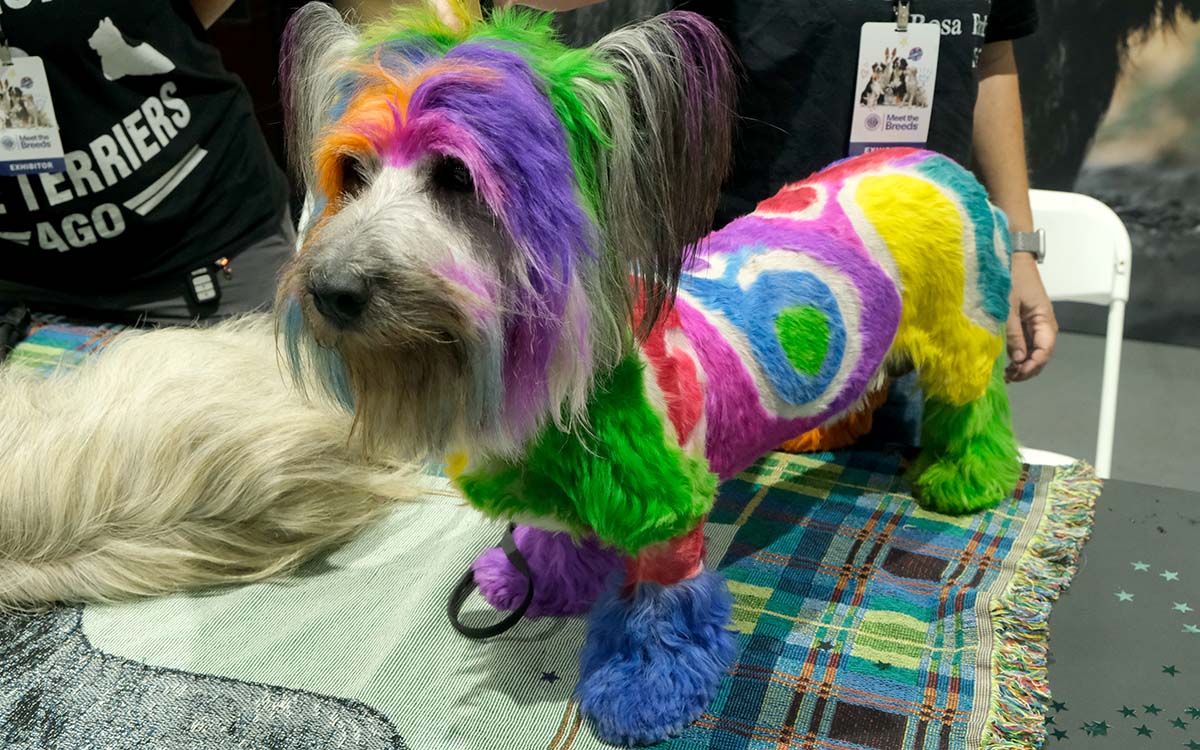 Many recognize popular dog breeds such as Golden retrievers, Dachshunds and poodles. But San Diegans have a chance to see some rarer types that may be be a good match for them.

The American Kennel Club’s Meet the Breeds event Saturday at the San Diego Convention Center was ready to inform prospective canine owners about which dogs are good with children, those who need more exercise and ones that can be happy living in an apartment.

San Diego is the first stop on a seven-city tour through Nov. 14 to Dallas, Tampa, Chicago, Raleigh, North Carolina and Columbus Ohio. The San Diego show continues Sunday from 10 a.m. until 5 p.m.

In addition to the booths dedicated to breeds from Alaskan Malamutes to Vizslas, people were able to watch agility performances, police dogs detecting explosives and dog sports in a center arena.

The show is the first public event in the convention center since COVID led to restrictions, and wearing face coverings was still required.

One of the most popular breeds in California, the bulldog, sat at a hugging booth rather than a pre-COVID kissing booth.

French bulldogs, or “Frenchies,” are the most popular breed in California. They are considered playful, easygoing and protective.

According to Rover.com, the most popular breeds in San Diego in 2021 are English bulldog, French bulldog, Siberian husky, Australian cattle dog and pug.

But Scott Lewis of the Bulldog Club of Greater San Diego cautions that bulldogs need a lot of care and attention.

Bulldogs can overheat easily in the summer and also cannot swim, he said. So they aren’t a good breed for people with pools.

COVID boosted dog ownership as some people found themselves isolated and in need of companionship.

“A lot of people bought dogs for COVID,” Lewis said. “Now they are going back to work and find they don’t have time for the dogs. So people are abandoning dogs, back in the kennels.”

The Siberian husky is another popular dog in the Golden State.

“They’re very popular among the military because they make great service dogs for our returning vets,” said Julie Barber, who had a snow sled display with her sledding dogs.

“They are one of the most loyal breeds — they like families but will also zero in on the emotional needs of one person,” she added.

Other breeds at the event are somewhat unheard of.

Meet the Harrier. There were only three litters of them last year nationwide, said Donna Smilie, a breeder from Inyokern in Kern County.

So people usually are too impatient to wait for an available pup and then settle on another dog.

“The Harrier is the best-kept secret of the dog world,” said Smilie. The harrier looks like a taller beagle and was bred in England to hunt rabbits.

“More pandas than Harriers,” she said.

While she describes the breed as great for an active family — gregarious and loving — the dogs must be in a yard with a secured fence and is unhappy when left alone. They put their noses down and just run because of their hunting instincts.

“It’s not easy to find a home for them,” Smilie said.

Erick Arceneaux added: “We’re trying to be careful preserving the purpose of the breed, the integrity of the breed. We want to cautiously grow the breed.”

Arceneaux and other breeders told cautionary tales about people who see dollar signs in breeding dogs, but don’t know enough about the dogs or about breeding to be responsible.

Improper breeding can lead to ill-tempered animals and those with health issues, which can cause illness and early death, breeders said.

Another rarer breed at the event is the Skye terrier.

There are about 5,000 Skye terriers in world, said Michelle Shiue, a breeder from San Diego. “They are one of least known and popular of AKC, and we’re trying to change that.”

Once owned by Queen Victoria, Shiue said, it is an ancient bred and not as popular as some newer mixes such as the Goldendoodle.

Shiue called the breed loyal, devoted to families, and all around great dogs that don’t require a lot of exercise and are not as energetic as other terriers.

Many people ask if they should get a puppy or adult dog.

The AKC says if you want to get a puppy, know that you are committing to a 10-year (or longer) relationship. The organization recommends seniors adopt a purebred rescue dog.

For seniors, the AKC asks questions to determine what dog matches their needs, including: How active are you and how much exercise are you willing and able to give your dog? What are your favorite activities? Where do you live (large house or small apartment)? How much do you travel?

Tickets for Sunday’s event start at $27 with early access and VIP packages available. No pet dogs are allowed. But guests are invited to run a people-sized agility course.