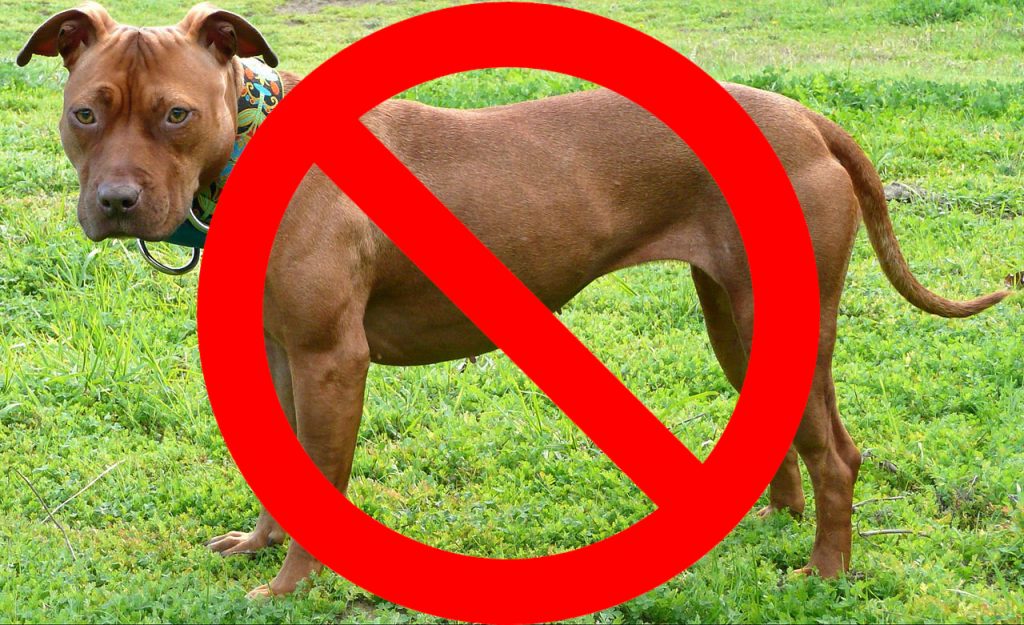 Breed-specific legislation (BSL) is a “blanket term for laws that regulate or ban certain dog breeds in an effort to decrease dog attacks on humans and other animals,” according to the American Society for the Prevention of Cruelty to Animals (ASPCA). The laws are also called pit bull bans and breed-discriminatory laws.

The legislation frequently covers any dog deemed a “pit bull,” which can include American Pit Bull Terriers, American Staffordshire Terriers, Staffordshire Bull Terriers, English Bull Terriers, and pit bull mixes, though any dog that resembles a pit bull or pit bull mix can be included in the bans. Other dogs are also sometimes regulated, including American Bulldogs, Rottweilers, Mastiffs, Dalmatians, Chow Chows, German Shepherds, and Doberman Pinschers, as well as mixes of these breeds or, again, dogs that simply resemble the restricted breeds.

The term “pit bull” refers to a dog with certain characteristics, rather than a specific breed. Generally, the dogs have broad heads and muscular bodies. Pit bulls are targeted because of their history in dog fighting.

Dog fighting dates to at least 43 CE, when the Romans invaded Britain, and both sides brought fighting dogs to the war. The Romans believed the British to have better-trained fighting dogs and began importing (and later exporting) the dogs for war and entertainment wherein the dogs were made to fight against wild animals, including elephants. From the 12th century until the 19th century, dogs were used for baiting chained bears and bulls. In 1835, England outlawed baiting, which then increased the popularity of dog-on-dog fights.

Fighting dogs arrived in the United States in 1817, whereupon Americans crossbred several breeds to create the American Pit Bull. The United Kennel Club endorsed the fights and provided referees. Dog fighting was legal in most US states until the 1860s, and it was not completely outlawed in all states until 1976. Today, dog fighting is a felony offense in all 50 states, though the fights thrive in illegal underground venues.

One goal of BSL is to prevent dog attacks on humans, dogs, and other animals before they happen.

According to DogsBite.org, enacting BSL “regulate[s] a small group of breeds that have a genetic propensity to attack and inflict severe, disfiguring injuries so that first attacks by these breeds can be averted. First attacks by pit bulls, for instance, almost always result in severe injury. In some cases, the first bite by a pit bull or [R]ottweiler is fatal.”

In Pawtucket, Rhode Island, BSL was overturned by a judge in 2013, resulting in a tenfold increase in pit bull attacks between 2013 and 2019.

As Daphna Nachminovitch, Senior Vice President of Cruelty Investigations for PETA, explained, “Pit bulls are a breed-specific problem, so it seems reasonable to target them. The public is misled to believe that pit bulls are like any other dog. And they just aren’t. These dogs were bred to bait bulls. They were bred to fight each other to the death. Just because we’re an animal-rights organization doesn’t mean we’re not concerned about public safety.”

BSL is a humane way to discourage pit bull breeding and fighting.

An estimated 80% of all dogs are spayed or neutered. However, only about 20% of pit bulls are sterilized. And only about 38% of animal shelter admissions are pit bulls, but the dogs account for 63% of shelter euthanizations.

Pit bulls are more likely to be confiscated or surrendered to a shelter because they are disproportionately selectively bred for fighting, and, therefore, more likely to injure or kill a human, another dog, or other animals.

As Brian C. Anderson, PhD, Editor of City Journal explained, the dogs have been bred with unique qualities that can make them dangerous: “First, the pit bull is quicker to anger than most dogs, probably due to the breed’s unusually high level of the neurotransmitter L-tyrosine. Second, pit bulls are frighteningly tenacious; their attacks frequently last for 15 minutes or longer, and nothing—hoses, violent blows or kicks—can easily stop them. That’s because of the third behavioral anomaly: the breed’s remarkable insensitivity to pain. Most dogs beaten in a fight will submit the next time they see the victor. Not a defeated pit bull, who will tear into his onetime vanquisher. This, too, has to do with brain chemistry. The body releases endorphins as a natural painkiller. Pit bulls seem extra-sensitive to endorphins and may generate higher levels of the chemical than other dogs.”

BSL eliminates or lessens these problems at the root by preventing pit bulls from being bred in the first place, much less allowing the dogs to be trained, abused, or neglected into aggressive behavior.

There is no evidence BSL makes communities safer.

BSL is ineffective because it treats the result (a dog bite) instead of the cause (bad animal owners). For example, Miami-Dade County, Florida, has had a pit bull ban since the 1980s, but the county still euthanizes about 800 illegally owned pit bulls per year. Aragon, Spain, saw no changes in dog bite numbers five years before and five years after BSL was enacted.

People who are breeding or training dogs for illegal fighting or to protect illegal activities will simply turn to another dog breed if pit bulls are banned. For example, following a 2005 pit bull ban in Council Bluff, Iowa, Boxer and Labrador Retriever bites increased, as did overall dog bites.

In 1990 when pit bulls were banned in Winnipeg, Canada, Rottweiler bites immediately increased. When the city changed the law in 2000 to be breed-neutral, all dog bites decreased.

BSL is also expensive to enact. Nationwide, BSL would cost an estimated $476 million per year, including enforcement of the law, related vet and shelter care, euthanization and disposal, and legal fees. There are about 4.5 million dog bites per year, resulting in about 40 deaths, making each bite cost taxpayers about $105.78 million.

That’s a steep cost for a relatively small, albeit important, issue. There are about 78 million dogs in the United States, meaning less than 17% of dogs bite less than 1.4% and kill less than 0.00001% of the US population. And, of course, breeds not covered by BSL also bite. One study of 35 common breeds found Chihuahuas were the most aggressive.

BSL is a distraction from legislation and policies that could actually accomplish safety goals.

According to a study of fatal dog bites between 1979 and 1996, “Although fatal attacks on humans appear to be a breed-specific problem (pit bull-type dogs and Rottweilers), other breeds may bite and cause fatalities at higher rates. Because of difficulties inherent in determining a dog’s breed with certainty, enforcement of breed-specific ordinances raises constitutional and practical issues. Fatal attacks represent a small proportion of dog bite injuries to humans and, therefore, should not be the primary factor driving public policy concerning dangerous dogs. Many practical alternatives to breed-specific ordinances exist and hold promise for prevention of dog bites.”

The ASPCA also notes chaining and tethering dogs outside, lack of obedience training, and selective breeding for protection or fighting are risk factors for dog attacks.

Legislating poor animal ownership would be more effective than bans. For example, St. Paul, Minnesota, forbids people who have been cited for animal abuse or neglect two or more times from owning pets.

Calgary, Alberta, Canada, enacted a community policing policy that focuses on aggression rather than breed. The city saw a 56% decrease in aggressive incidents and 21% decline in bites in two years.

1. Should cities enact breed-specific legislation? Why or why not?

2. What other policies might cities consider to curb dog bites and increase community safety? Explain your answer(s).

3. What other policies might cities consider to stop illegal dog fighting? Explain your answer(s).

4. Consider how you felt about the issue before reading this article. After reading the pros and cons on this topic, has your thinking changed? If so, how? List two to three ways. If your thoughts have not changed, list two to three ways your better understanding of the “other side of the issue” now helps you better argue your position.

5. Push for the position and policies you support by writing US national senators and representatives.